FaZe’D Out: What Happens When You Don’t File for Trademark Protection Early?

With over two million active trademarks in the United States alone, it’s not easy to find a brand name that is unique and distinctive. But coming up with a name is only half the battle. If a brand doesn’t file for trademark protection early in the name-creation process, it can face lawsuits, hefty legal fees, and may even lose the rights to its name altogether.

Unfortunately, some brands have to learn this the hard way. In the process of building its brand and reputation, the FaZe Clan was a bit late when it came to its trademarks, which led to big problems down the road.

What is the FaZe Clan?

If you are a fan of esport video games such as FIFA, Fortnite, Call of Duty, Valorant, or Rocket League, you are probably familiar with the FaZe Clan. This popular esports and entertainment organization started in 2010.

The FaZe Clan now boasts a fanbase of over 510 million people combined over social media platforms. Outside of esports competitions and streaming content, the FaZe Clan has expanded into apparel, events, and other businesses.

The bad news for FaZe Clan? The brand name “Faze” is not unique. Another similar company, called FAZE Apparel, was founded in 2007, three years earlier than the FaZe Clan. This clothing company filed a trademark application in 2008 for its F.A.Z.E logo and wordmark. However, it did not file a trademark application for its “FAZE” mark until 2013. That left the door open for FaZe Clan to act. But did they?

In 2018, FAZE Apparel filed a lawsuit against the FaZe Clan for alleged trademark infringement. This resulted in a preliminary injunction issued by a district judge, which is a court order to force a party to do or stop specific activity.

The injunction prohibited the FaZe Clan from selling apparel that included “Faze” without “Clan” being displayed prominently. Despite having received several cease and desist letters from FAZE Apparel dating back to 2014, the FaZe Clan proceeded to use and file on the trademark, leading FAZE Apparel to initiate the 2018 lawsuit.

In addition to the lawsuit, FAZE Apparel also filed an opposition to the FaZe Clan’s trademark application. This is a proceeding inside the Trademark Office where someone can challenge someone else getting a trademark registration. FAZE Apparel argued that the FaZe Clan’s use of the mark would cause confusion among consumers, damaging their business.

Even before the FaZe Clan’s application for “FAZE” was registered, FAZE Apparel was already issuing cease-and-desist letters, trying to push the esports organization away from its brand. It came down to a race in the end, and guess what?

FAZE Apparel beat the FaZe Clan’s first trademark filing by only 4 months. If FaZe Clan had filed a trademark application when it was founded in 2010, it could have beaten FAZE Apparel by three years. Think of all the branding and legal struggles the company could have avoided if they had filed earlier. 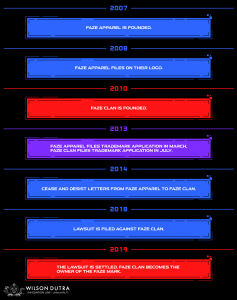 The first one to file a trademark application gets priority in their trademark examination, forcing any other applications to either wait for the examination process to finish or file an opposition to the pending application. However, application priority can give significant advantages when determining the outcome of these situations.

FAZE Apparel’s opposition was strengthened by their priority in filing. While the FaZe Clan was well-known and had established a recognizable brand, they had neglected trademark registration for their first few years of existence.

Ultimately, the FaZe Clan ended up purchasing FAZE Apparel, evidenced by their ownership of FAZE Apparel’s former trademark registrations. This means that the FaZe Clan has the protection it originally sought for its apparel business, albeit at a much higher price than they probably originally intended.

While it worked out for the esports organization, they could have saved a lot of time and money if they had been more conscientious of their trademarks and brand protection.

Applying for trademark protection should be one of your first steps when starting a new company or business. Not only will the process notify you if the name is already taken, but it will prevent others from using a similar name in connection to the goods and services you offer.

Unless you have FaZe-level resources to buy out the competition, it’s better to act now than to face issues down the road. Learn more about trademark protection and book a consultation with our team.

Submit your query and we'll get back to you after we've completed our knock-out search with next steps recommendations.